NOSIGNER embodies the possibilities of social design across different fields, such as product, architecture, and graphic design. The company has engaged in co-creation with various companies and local governments through projects such as “Disaster Preparedness Tokyo,” a manual to help prepare for disasters, and the social distancing signage “SOCIAL HARMONY.” NOSIGNER has now opened a new office on May 2021. The spaces of the office are composed of light gauge steel framing, tiles partly made of waste materials, and industrial aluminum foil, embodying the ideal of sustainability.

The companies’ Representative Eisuke Tachikawa joins us today to talk about the history behind the opening of the new office, the philosophy behind the new office design, and suggestions on how to realize sustainability. In the second half of the interview, we talked about the “craftsman’s” perspective necessary for sustainability, and the potential for creativity that everyone has within them. 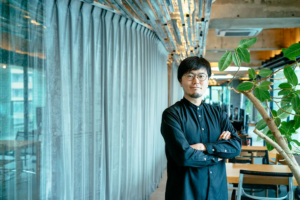 WORK MILL：To disrupt a society that’s been systemized to a high degree is not an easy feat.

TACHIKAWA：When I think about the backstory of these lightweight steel beams, I think that there must exist an opportunity for disruption somewhere. The beams were mined from somewhere on Earth and smelted at high temperatures before being shaped. Then they were stored in a warehouse before being transported here and used inside walls. Those walls were demolished and the lightweight steel beams were exposed. They were supposed to be transported somewhere and melted to become something else. There can be plenty of chances to reconsider a detailed process like that every step of the way, depending on how ingenious you are.

─Eisuke Tachikawa
NOSIGNER Representative / JIDA President / Creator of Evolution Thinking / Design Strategist / Keio University Guest Associate Professor
Eisuke Tachikawa is a design strategist who designs alternatives for a hopeful future and aims to renew creativity education. In order to foster change-makers in various sectors of industry, academia, and government, he advocates “Evolution Thinking,” which tells the essence of creativity from the natural phenomenon of biological evolution, and continues to work to spread creative education. He crosses the boundaries of design fields such as product design, graphic design, and architecture to create successful comprehensive strategies for numerous projects dealing with next-generation energy, regional revitalization, and SDGs.
He has won over 100 design awards worldwide, including the Good Design Gold Award (Japan) and DFA Design for Asia Grand Award (Hong Kong), and served as a judge at various award ceremonies such as Good Design Award, DIA (Design Intelligence Award), DFAA (Design for Asia Award), and WAF (World Architecture Festival). Some of his most famous projects include OLIVE, Tokyo Bousai, PANDAID, YAMAMOTOYAMA, Yokohama DeNA BayStars, YOXO (Yokohama, Japan), and the concept of the Japan Pavilion at the OSAKA, KANSAI EXPO 2025.
He is the writer of “Design and Innovation – 50 ways to create the future” (Pie International, 2016) and “Evolution Thinking” (Ama no Kaze, 2021) which won the YAMAMOTO SHICHIHEI Prize, Japan’s leading academic award selected by biologists and economists.

By nature, Japanese houses were configured modularly, with tatami mats, sliding doors and front doors able to be repurposed elsewhere. We can also break down mud walls and reuse them. In short, we can anticipate what an object’s next use will be, and make things to be reused within a narrow compass. That kind of primitive structure holds the secret to the best placement of resources.

WORK MILL： If we look back on how things were run in the past, regional communities set up trade blocs, and the people living there made houses and objects, and grew crops as well. These processes were optimized as the economy grew. In one way convenience was heightened by carve-outs to the outside world. How far back to the beginning should we return? Or should we search for another way? It‘s hard to say.

TACHIKAWA： In that way, lightweight steel beams and calcium silicate boards may be modules of the present day. The wooden dwellings that have served as the basis for Japanese homes have survived great earthquakes and air raids. To protect people’s lives, priority has been placed on using inflammable materials rather than ones that can be recycled. So we have a setting where lightweight steel beams and calcium silicate boards are proliferated. By pouring our creativity into the recycling of their waste materials, we find that the steel beams can become interior finish material, and that there may be a use for the boards as well.

Actually, the “SOLIDO” tiles used in this office contain waste material. In the development phase we took surveys on how they might be received. There’s an unevenness that comes from the heterogeneity of material. If you think of it as a typically mass-produced product, you might deem it as blemished or stained. But if you looked at it from a ”crafty” perspective, couldn’t you say it has a certain charm?

In this way we closely analyze each individual process. If we can keep proposing new methods endlessly, non-modular materials might be adapted into new modules. The lightweight steel frames themselves might even be updated to a more reusable design. By letting our office set an example, we hope to encourage others to try making their offices with waste matter.

WORK MILL：Creating a precedent might encourage other examples to pop up.

TACHIKAWA： They could appropriate the same methods, or they could gain ideas for a different method from ours. It’s impossible to be involved in all construction, so I think it‘s more realistic to spread awareness by creating an example.

The reason I have no interest at all in style or originality is surely because my own ideas are inherited from the evolutionary lineage of design, and so will be inherited by someone else in the future. In this process of succession, if there isn’t a previous example for something, then we can fill in the blank and create it, so it will be passed to the next generation. What I want to do is create those nonexistent previous examples. Because I’m able to take on risks in this office, I’d like to go through many experiments.

A “crafty perspective” to realize sustainability

WORK MILL：I’m sure more and more of those examples will be created in the future.

TACHIKAWA： Right around the same time that we were making the new office, we co-founded ZENLOOP, a consulting firm that specializes in circular economics, with researchers at the Keio University Graduate School of Media Design (KMD). We’ve developed various projects in conjunction with KMD, and we’d like to get involved with enterprises and local communities.

For example, NOSIGNER has been involved in the rebranding of Echizen lacquerware in Sabae, Fukui, but we are now attempting to update the structure to one that allows the industry to continue.

Echizen lacquerware is known as a traditional handicraft, but it also includes industrial-use lacquerware for Japanese inns and restaurants, which account for 80% of its market share. However, in recent years the demand has decreased, with a heightened momentum for plastic reduction, and there are many manufacturers who are trying to refrain from making deadstock.

We are redefining the lacquerware industry as the “coating industry,” which applies to many more products beyond lacquerware alone. For example, we have a project where we recoat synthetic lacquer trays or large cups left as deadstock, install clock mechanisms and upcycle them as clocks.

TACHIKAWA：I mentioned having a “crafty” perspective earlier, but I think that it really is indispensable for actualizing sustainability and upcycling. Rather than recycling mass produced goods homogeneously and en masse, we need to start at the point where we say, “I don’t know what kind of trash is going to come out of this.”

At that point, we exercise our creativity to view it from a crafty perspective, and come up with answers like “Maybe we can fix it,“ “Let’s do this,” and “We might be able to use it this way.” Then we use our hands to help these ideas take shape. The person who arranged the lightweight steel beams in our office for us is also an artist who’s active in his hometown, Minoru Inayoshi. We couldn’t get a contractor to accept the job.

WORK MILL： They can’t take any action without blueprints or specification documents. In one way that’s optimization, but on the other hand you could also say that they’re letting go of the option of thinking for themselves. To take on a “crafty” perspective is perhaps an act of reclaiming your creativity.

TACHIKAWA： Exactly. With creativity, we can reach for sustainability. When we talk about sustainability, we tend to list next generation energy and the development of new high-tech materials. Of course they’re important, but what really must change is us. We continue to tolerate wastefulness… I really think the biggest problem might be indifferently allowing things that have value to be thrown away in front of our eyes.

For example, if on the day that large refuse like furniture and appliances are collected, we could get society to think “today’s a huge city-wide flea market,” don’t you think society might change a little?

WORK MILL：Definitely. It really is a waste. We pay municipalities collection money in the form of stamps which we stick on large items we’re throwing away, so it’s considered illegal for other people to take those things home with them.

TACHIKAWA： But if we had a structure where the baton was properly being passed, those things might not have become trash in the first place. When we reconsider these things one by one, we find many things that should rightfully be a different way. Design is also about changing structures.

We tend to take today’s society as a matter of course, but it’s only been 260 years since the industrial revolution, and at most 50-60 years since Japan’s period of rapid growth. With houses and with clothes, Japan has excelled at modularization, but it wasn’t something that sprung up overnight. The Edo period alone was 300 years, but these things had been passed on without stop even before then. As a result of people’s devising throughout time, the standards for tatami mats and textiles were set, and they wove in other repurposed things to get the finished method.

In that case, to change the way things should be in this world and reinvent more sustainable methods might mean we are an intrinsically favored people. That is our shared challenge, and we are right at the turning point. Will we be able to cross the turning point, or will civilization up until now be unable to hold up? We are at the critical moment.

That’s why it is necessary to reinvent our livelihood in every aspect, and the creativity required to do that is in every one of us. I think anybody’s had the memory as a kid of walking happily in town and finding a rock or a TV. Everyone has the creative power to think “this can be used this way” or “this would be nice if we did it like this.”

I would be happy if progressive thinking and the examples that we present provide some hints as to how to manifest creativity. I think it would be great if we could return to a society where exhibiting creativity is extraordinarily common and natural for anyone. Home to numerous industrial waste incinerators and treatment plants, Kunugiyama, a mixed forest which extends across the cities of Tokorozawa, Kawagoe, and Sayama, and the town Miyoshi, was once called The Ginza of Industrial Waste. In 1999, erroneous media reporting led to an uproar about dioxins in Japan. Against a background of intense finger-pointing at […]